As part of the Government’s £500m Reversing Beeching scheme, the Department for Transport has sought applications for its Ideas Fund, as a part of the scheme, and the BWR was invited to take part.

The BWR has made two applications, one for the re-opening of the Boscarne – Wadebridge line and another for the provision of enhanced services between Bodmin and Bodmin Parkway.

Nick Wood, the director of the Railway PLC who has lead on the submissions, said “The return of the railway to Wadebridge has been the long-held ambition of the Bodmin & Wenford Railway for over 20 years. A lot of work has been carried out by consultants as well as our own volunteer staff over that time to assess the viability of reinstating train services to and from Wadebridge as well studies in to the practicalities of doing so, whilst retaining the integrity of the Camel Trail.” 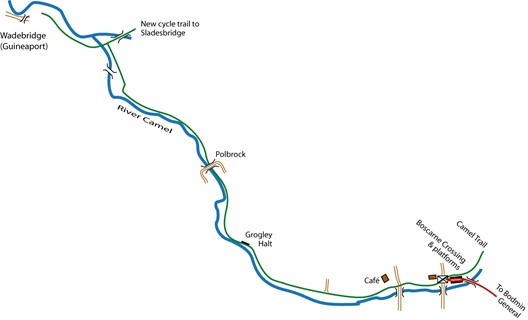 Map of proposed return to Wadebridge

The Ideas Fund has received 50 applications and will, for those schemes considered to be suitable, award up to £50,000 towards further studies being undertaken to help assess the practicalities and appropriateness of such schemes.

If successful this award will allow us to continue with engineering, environment and flood risk investigations as well as studies into passenger demand, train frequency and the tourism potential.

In 2016 an Outline Business Report, prepared by Eden Business Analysis and jointly funded by Cornwall Council and the BWR, reported that the we contributed £2.5m to the local economy and anticipated in excess of £5m in annual benefit to Wadebridge and the surrounding areas.

The original Bodmin and Wadebridge Railway, of 1834, was one of the very first railways in the world and was one of the very few granted Royal Assent by King William IV. Steam hauled trains were traveling along the Camel Valley between the two towns before London had a railway. Upon closure of the line part of the track bed was secured by North Cornwall District Council for future use by the BWR, with Cornwall Council subsequently acquiring the rest.

The Bodmin & Wenford Railway is one of Cornwall’s leading attractions operating regular services, special trains and events over 220 days of the year. The railway is currently closed to visitors due to the covid-19 crisis and has a fundraising campaign running seeking much needed financial support. Further details can be found here.

An Ivatt 2MT tank, number 41312, is joining us for a few weeks from it's home at the Watercress Line

BODMIN & WENFORD RAILWAY GETS ON BOARD ‘LOVE YOUR RAILWAY’ NATIONWIDE CAMPAIGN

From July 19th the majority of the Covid-19 restrictions were relaxed, becoming guidance rather than law. We want to make sure that our visitors, staff and volunteers are safe so we will have the following in place.